This Lamborghini 8800 Sirocco cell phone has 3 bands GSM coverage so that it can be used in 5 continents. It’s just like usual mobile phone that it has internal memory, TFT display color and the camera. This cell phone is protected by scratch-resistant sapphire coated glass. I guess the things that made it expensive is the Lamborghini tag attached to this phone. It has a wallpapers, screensaver and ringtones and documentary video about Lamborghini. 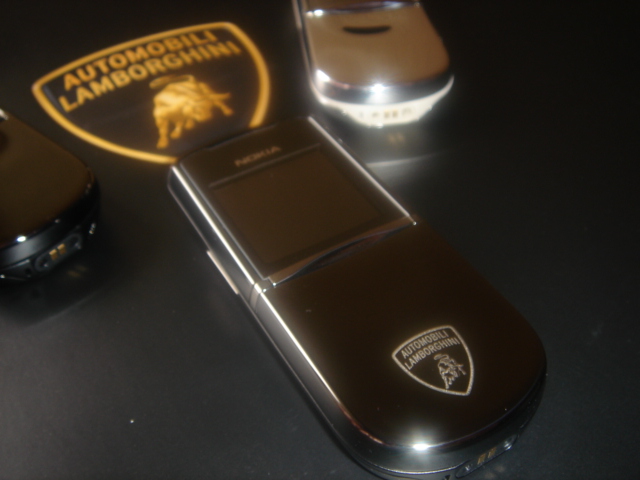 This cell phone is just like standard of Nokia 8800. Just the outlook casing of the cell phone is encased with gold. This casing will capture attention from the people around of course. It’s has a standard of a smart phone. Such as 62,000 color TFT (208 x 208) display screen along with a SVGA .5 MP camera. MMS, SMS, USB, Java, WAP, Infrared, Bluetooth and Edge connectivity are present. Other standard features like FM Radio, Mp3 Player, 64 polyphonic and Video Recording are also present.

This luxury cell phone is coming from Motorola cell phone producer. THe Motorolla Special v220 edition. It’s tagged for $51,800 and was designed by Peter Aloisson, Austrian designer. It’s pretty much feminine in looks. All features are standard except that this cell phone is studded with 1200 diamonds on the front panel as well as 18 carat gold is laid in the keyboard.

Vertu diamond cell phone is featuring tiny diamond dotted all over the body and the keypad that carries eight carat of diamond. The body is created from finest platinum and underpinned with ruby bearings. It’s also equipped with similar ceramic originally intended for space shuttle. You have to provide $88,000 to own this cell phone. 200 cell phones of this model have sold worldwide.

Another design of Peter Aloisson. The name is coming from the princess shaped diamond cut that studded all over the casing. 138 diamonds out of 318 shaped in this style. The others is shaped in brilliant-cut pattern. This cell phone totally use 17.75 carats of diamonds and 18 Carats of white gold. This version of iPhone are sold for $176,400.

This cell phone is produced by JSC Ancort that originally designed by luxury accecories designer Peter Aloisson. This expensive smart phone is encased with a platinum base and has 50 diamonds and 8 of them is a rare blue diamonds. The navigation key and the Ancort logo are of 18 Carat of rose gold. This cell phone was built on Windows CE.

This luxury gadgets is coming from the designer Stuart Hughes. It’s the world’s most expensive cell phone unveiled in 2009. Goldstriker iPhone is encrusted with 271 grams of 22 carat pure solid gold. More than 200 diamonds added on the cell phone. Apple logo on the back features 53 gems and home button is covered with a single 7.1 carat diamond. The iPhone 3GS Supreme decorated as well in a chest carved from granite and Kashmir gold along with a lining made from top Nubuck grain leather.

Popular posts from this blog

May 27, 2012
1. Glock-17 Glock is a series of semi automatic pistols designed and produced by Glock GmbH of Deutsh-Wagram, Austria. It has been in service since 1982. It has an extensive plastic structural content. It has a short recoil locked breech; tiliting barrel action fires amongst others a 9x 19mm Parabellum cartridge is used by the Austrian military and US Law Enforcement agencies. Glock pistols have become the most profitable line of products, taking up 65% of the market share of handguns in the United States, in spite of preliminary opposition from the market due to strength and reliability concerns. 2. Smith & Wesson .500 S&W Magnum This company is the largest manufacturer in the United States. Their guns are used in many Hollywood films such as Clint Eastwood’s Dirty Harry. The .500 S&W Magnum is considered the best commercial sporting handgun cartridge by the muzzle energy it makes. The gun is a double action revolver, which provide clients with power and veloc
1 comment
Read more

May 27, 2012
1. Paul Bernardo: Paul Bernardo was in 1995 for kidnapping, raping and murdering 2 teenagers, Kristen French and Leslie Mahaffy. He committed these crimes with his then wife, Karla Homolka. Homolka, although not innocent, portrayed herself as a victim at the hands of a murderous monster. He was also charged for the death of Homolka’s sister, Tammy, who they drugged and raped. Homolka did most of the work, serving Tammy to Bernardo as a sex gift. His crimes were not secluded to these incidents. Bernardo had a colorful past as a Scarborough rapist. Many women have come forward accusing Bernardo of assault and rape as well. Bernardo was sadistic, narcissistic and a failed rapper. He refers himself as “the King” and is now spending the rest of his life in Kingston Penitentiary. His obsession with taking the virginity of girls was cruel and beyond atrocious. He should thus be served with a death penalty. 2. Kelly Virk: Many killers show little or no remorse after the crime the
1 comment
Read more

May 27, 2012
1. Sheryl Sandberg, Facebook She is the CEO of Facebook. She monetizes the largest social networking site and manages Facebook`s sales, marketing and business development, human resources, public policy and communication. WOW! 2. Mitchell Baker, Mozilla Winifred Mitchell Baker is the Chairperson of the Mozilla Foundation and the former CEO of the same corporation. She was trained as a lawyer and now coordinates business and policy issues for the Mozilla Foundation. She was included in Time Magazine`s list of 100 most influential people in the world in 2005. 3. Meg Whitman, HP In September of 2011, Hewlett-Packard replaced its CEO with former eBay CEO Meg Whitman. The move came with the company`s bid to garner new leadership. The incumbent, Leo Apotheker was highly criticized for how he handled a major strategy shift in 2011. 4. Sue Gardner, Wikipedia Gardner is the director of the Wikimedia foundation. She turned the online encyclopedia into the first reference point for all who loo
Post a Comment
Read more