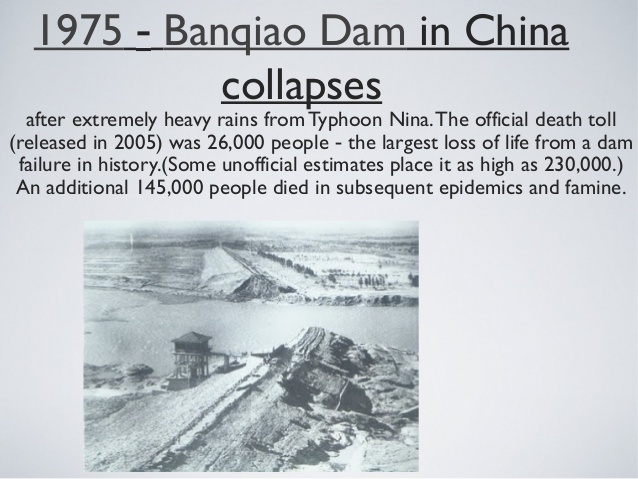 The Banqiao Dam was built in order to hold back around 12 inches of rainfall each day. However, in August 1975, those who created the dam would realize it wasn’t enough. During this time a storm came, caused by a collision between a cold front and Super Typhoon Nina, that brought heavy rains. The rain was so heavy that 7.46 inches fell every hour. This added up to about 41.7 inches of rain each day. The dam failed because of sedimentation blockage and 15.738 billion tons of water was released within the next few days. Waves up to 23 feet high rushed down streets at 31mph and destroyed everything. After the water settled down, over 231,000 people were dead.

The Antakya earthquake occurred in 565 A.D. There are not many details available today, but it was said to have hit on May 20. It left damage ranging between 1-24 million dollars. The earthquake caused about 250,000 deaths.

On December 26, 2004, a day after Christmas, and undersea earthquake struck, with its epicenter off the coast of Sumatra, Indonesia. Through the earthquake hit many different places, it was most felt in India, Sri Lanka, Indonesia, and Thailand. This is the second largest earthquake recorded, reaching a magnitude of 9.1-9.3. It lasted between 8-10 minutes, and was so severe that the entire planet vibrated and other earthquakes were caused, such as those in Alaska. The earthquake and tsunami caused over 225,000 deaths.
In 1839, an extremely large cyclone hit Coringa, India. It happened on November 25 when a 40-foot storm surge caused by the cyclone completely ruined a city. It wiped out everything that it came into contact to. Sadly, the city was never really rebuilt, 20,000 vessels that were docked in the city were destroyed. Over 300,000 people were dead once the storm surge went down.

After the Bhola Cyclone devastated croplands, cleanup efforts included attempting to salvage rice and other grains in order to avoid starvation.
The Bhola Cyclone hit East Pakistan, now known as Bangladesh on November 12, 1970. It stands as the deadliest cyclone to ever have been recorded. Strong winds hit the region at 115mph and the storm was said to have reached the strength of a Category 3 hurricane. However, it wasn’t the winds that killed. Most of those who lost their lives during this natural disaster were killed because of the storm surge. It is said that up to 500,000 people were killed because of the heavy rain and flooding in many areas.

The Shaanxi earthquake stands as the deadliest earthquake ever. On February 14, 1556, an earthquake hit China. Its epicenter was in the Wei River Valley, and as many as 97 counties in places such as Henan, Shaanxi, Hebei, Anhui, and others were affected. In Huaxian, every building that stood was ruined and more than half of the people that lived there were killed. Some statistics show that some counties have up to 60% of their population killed. In all, more than 830,000 people died from the Shaanxi earthquake. Studies have shown that the earthquake’s magnitude was somewhere around 8. Because it was so strong, aftershocks were felt for nearly half a year later.

The Yellow River, which is located in China, is extremely prone to flooding. In 1887, the Yellow River flooded and completely devastated about 50,000 square miles of land. The flood is said to have killed between 900,000-2,000,000 people. Farmers that lived and planted near the river had built small dikes that were, at one point, able to hold back water if it rained. However, the heavy rain that came much too quickly overpowered the dikes and the river flooded.

Occurring in 1931, the Central China Floods is said to be the deadliest natural disaster that has ever been recorded. It has since been called the greatest disaster to visit China. After a long drought, China was hit by seven cyclones, which brought inches and inches of rain. During the Central China Flood, three different rivers flooded-over, and up to 4 million people were killed because of the floods. Though there were dams built to hold back water in the Yangzte, Yellow, and Huai rivers, they were either poorly built or much too small.

Popular posts from this blog

May 27, 2012
1. Glock-17 Glock is a series of semi automatic pistols designed and produced by Glock GmbH of Deutsh-Wagram, Austria. It has been in service since 1982. It has an extensive plastic structural content. It has a short recoil locked breech; tiliting barrel action fires amongst others a 9x 19mm Parabellum cartridge is used by the Austrian military and US Law Enforcement agencies. Glock pistols have become the most profitable line of products, taking up 65% of the market share of handguns in the United States, in spite of preliminary opposition from the market due to strength and reliability concerns. 2. Smith & Wesson .500 S&W Magnum This company is the largest manufacturer in the United States. Their guns are used in many Hollywood films such as Clint Eastwood’s Dirty Harry. The .500 S&W Magnum is considered the best commercial sporting handgun cartridge by the muzzle energy it makes. The gun is a double action revolver, which provide clients with power and veloc
1 comment
Read more

May 27, 2012
1. Paul Bernardo: Paul Bernardo was in 1995 for kidnapping, raping and murdering 2 teenagers, Kristen French and Leslie Mahaffy. He committed these crimes with his then wife, Karla Homolka. Homolka, although not innocent, portrayed herself as a victim at the hands of a murderous monster. He was also charged for the death of Homolka’s sister, Tammy, who they drugged and raped. Homolka did most of the work, serving Tammy to Bernardo as a sex gift. His crimes were not secluded to these incidents. Bernardo had a colorful past as a Scarborough rapist. Many women have come forward accusing Bernardo of assault and rape as well. Bernardo was sadistic, narcissistic and a failed rapper. He refers himself as “the King” and is now spending the rest of his life in Kingston Penitentiary. His obsession with taking the virginity of girls was cruel and beyond atrocious. He should thus be served with a death penalty. 2. Kelly Virk: Many killers show little or no remorse after the crime the
1 comment
Read more

May 27, 2012
1. Sheryl Sandberg, Facebook She is the CEO of Facebook. She monetizes the largest social networking site and manages Facebook`s sales, marketing and business development, human resources, public policy and communication. WOW! 2. Mitchell Baker, Mozilla Winifred Mitchell Baker is the Chairperson of the Mozilla Foundation and the former CEO of the same corporation. She was trained as a lawyer and now coordinates business and policy issues for the Mozilla Foundation. She was included in Time Magazine`s list of 100 most influential people in the world in 2005. 3. Meg Whitman, HP In September of 2011, Hewlett-Packard replaced its CEO with former eBay CEO Meg Whitman. The move came with the company`s bid to garner new leadership. The incumbent, Leo Apotheker was highly criticized for how he handled a major strategy shift in 2011. 4. Sue Gardner, Wikipedia Gardner is the director of the Wikimedia foundation. She turned the online encyclopedia into the first reference point for all who loo
Post a Comment
Read more